I got the inspiration for this poem from the book, "You Don't Know Me" by David Klass. It is about a teenage boy who is abused by his step-father and is truly amazing.

If you are someone you know is being abused you must tell somebody. I know you probably think there is no hope or that nobody will believe you but trust me, somebody will and they will help you.

Happiness In The Pain

A girl stormed out of her house one night,
After her and her mother had had another fight,
"She does not understand me, She does not know."
Each thought she had was another blow.
She loved her mother but hated their fights,
Every word screamed was just like a bite,

The girl continued down the dark street,
Her head down, staring at her feet,
She wished that they could just stop the fights,
but at the end of the tunnel she saw no light,

A couple of blocks away on that same sad night,
A boy was in his own kind of fight,
His drunken father's fist coming at him again and again,
Oh, how he just wished it would end,

He stared into his father's crazed eyes,
And all he saw was a bunch of lies,
He suddenly felt a burning in his core,
And at that moment knew he would survive the war,
He leapt at his father, hatred burning in his throat,
His father tried to yell but it came out like a croak,

Nobody saw and nobody heard,
That, the free bruised boy was sure,
And as he walked out into the clear night,
He knew he had finally won the fight,

While walking, the girl prayed to god the fights would end,
As she rounded a black-dark bend,
On the other side she came face-to-face with a boy,
Who was bruised and battered but on his face was joy,
He merely nodded at her and continued on his way,
And the confused girl wanted to ask if he was okay,
But she decided against it and turned back to go home,

Walking again in the dark streets all alone,
She thought of the boy, in pain but happy,
And decided even though she thought it may be kind of sappy,
That when she got home, she would hug her mom,
Tell her she loved her, that she was the bomb,

And she would try to be like that boy in some ways,
Try to find happiness in the pain. 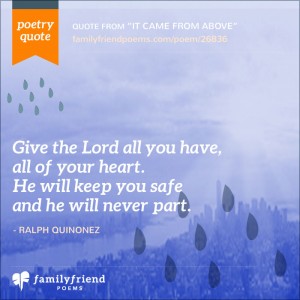