I was going through a really hard time in my life, and I honestly don't think I would be here if it weren't for my best friend. She was there for me when no one else was.

Almost 40 years ago I knew this little girl on my bus. Her name was Jennifer Barret. She was about 6 or 7 years old, and I was 14. Jennifer and I always hated each other. She was this little...

Almost 40 years ago I knew this little girl on my bus. Her name was Jennifer Barret. She was about 6 or 7 years old, and I was 14. Jennifer and I always hated each other. She was this little blonde-haired brat that stuck her nose into everyone's business. She snitched on me once because I had my pocket knife out cleaning the crud from under my nails. You see, we’re country folk and that's what we do. Anyway, Jennifer was just this little pain. She had a big brother who was also a pain. I didn’t care too much for them. But sometimes I would catch Jennifer staring at me. Who would have thought she one day would be my girlfriend and very best friend in the world? There’s more to the story, but Jennifer Barret is still my best friend to this day, and I love her so much, it is like an explosion. Both of us are very much in love and plan to be together one day.

I have a depression, and then there was a girl who came into my life. One day, my life was changed because that girl just changed my life. She taught me how to love and how to be an active person. And then, I feel so happy when I am always with her. I love her so much. I don't want let her go. I am sad because she is with her favorite friends. I will do anything to make her proud.

Miss Carty is a teacher I had for a year. To me, she wasn't really a teacher; she was more of a friend to me. Honestly, I was in a mashup when she came, but she really made me see the future of life and the world. She helped me get through everything, even in my hard times. When I don't want to do my physio, my meds or when I don't want to eat at all, then she makes sure I do all of it. I knew God sent an angel to me to guide me along the way, but now she's gone to another new job. Miss Carty, if you're reading this, I am writing this all the way from the hospital to tell you that I've really missed my friend to talk to and understand me.

My best friend passed away thirty years ago. After that I could not find somebody like her. A true friend is a blessing but difficult to find.

Ms. Foster is the teacher that I've had for a year. She's one of the best teachers I've had. She's always there when I need to talk. If it weren't for her, I couldn't have made it as far as I have. She's always telling me to never give up.

Been in this same situation and I have a friend who is there for me every step of the way.

I had lost touch with my friend Rob after H.S Graduation when I moved away for College... it seemed almost like Fate when he ended up in MD only a short drive away. Then my grandmother became ill and I moved back to the city I love, and as if no time had passed at all, after almost 7 years, Rob and I reconnected and since then we have been inseparable. He knows about my illness (psychiatric) and he never treated me any different, as a matter of fact he's the one there when the worst of it hits, and no matter how bad or how long the episode lasts he stays right by my side. I count down the hours until he gets home from work, mindlessly trying to fill my day so that the hours go by faster, but no matter what the time goes by so slow, until he gets home then it goes too fast. It never seems like we have enough time, and trying to find moments just for the two of us so I can tell him how important he is to me, it's like trying to catch smoke with my bare hands. It's been a rough year, my dear cousin was taken from us too soon, a beautiful 8 year old girl with more love in her heart than anyone else I've ever met, and a friend of mine from HS, with a rare kind of cancer he'd been fighting all his life, has finally found peace ( I Hope) as well. After losing three of the most important people in life, then my young cousin and a good friend... well I never would have made it through it all if not for my dear friend Rob. In a very literal way he is the reason I keep trying. Some people go their entire lives looking for a friend like Rob, I don't know what ragged waif like me could have done to be given such a gift, but I'll never take it for granted or throw it away.

I recently went through a divorcé, and without knowing, a real good friend from Elementary school was also. We hooked up as friends again and I honestly don't know what I would do without him! He is my rock and I know he will always be there for me. I love you! R.D.M.

This poem has really touched my soul in such a way that it reminded me of my best friend whom I last saw her last year, she was the pillar of my strength, the laying box where I laid my secrets, the tissue to wipe my tears but more especially the precious friend I have ever had in life. If everything was according to me, I would build her a house in heaven so that people could see how special she is to me!

I and my bestfriend had a simple misunderstanding but it's really the start of a good fight.

Yes, very much, I lost a friend from a stupid mistake I made, it had not involved my friend, but she warned me. Thank you so much I was looking for the right thing to say!! 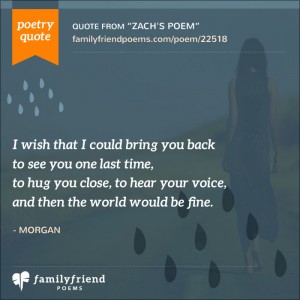