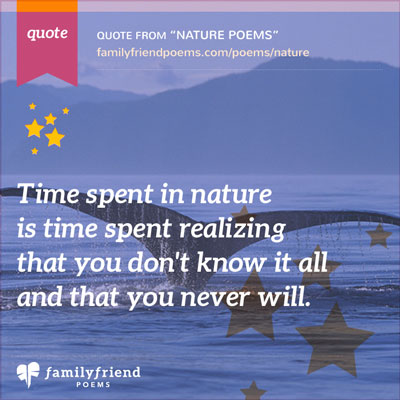 Whether one is watching a thrilling thunderstorm or looking up at a mighty tree, the experience of nature is one of awe. One cannot help but marvel at the intricate design of a single leaf, or the roar of a great waterfall. Time spent in nature is time spent realizing that you don't know it all and that you never will. The earth is meant to be enjoyed by its inhabitants. That includes keeping it in the pristine condition in which it was discovered. Everyone has a part of the earth that they relate to the most. Whether it is a majestic mountain range, a roaring waterfall, a bouquet of flowers, or the calm of the woods, these are places to get to know oneself and build bonds with family.