Humorous Poem About The Inconsistencies Of English Language

Hello, I am a retired university professor who had a fulfilling career, spanning 32 years at Chicago State University. Now, in retirement, I fill my time writing fiction, personal essays, and poetry. This keeps my brain cells firing and preserves the sanity of my dear wife. We live in Northbrook, Illinois, and enjoy six children, fourteen grandchildren, and extensive travel.

Very clever and funny, but it kinda blows my mind reading through this at the same time! How on earth did I manage to learn this wonderful, confusing language?! I must be converting it into...

Published by Family Friend Poems October 2017 with permission of the author.

Hear eye sit inn English class; the likelihood is that eye won't pass
An F on my report card wood bee worse than swallowing glass
It's knot that eye haven't studied, often till late at knight
Butt the rules are sew confusing, eye simply can't get them write

Hour teacher says, "Heed my advice, ewe must study and sacrifice"
Butt if mouses are mice and louses are lice, how come blouses aren't blice
The confusion really abounds when adding esses two nouns
Gooses are geese, butt mooses aren't meese; somebody scent in the clowns

Two ultimatums are ultimata, and a couple of datum are data
Sew wouldn't ewe expect it wood bee correct fore a bunch of plums to be plata?
And if more than won octopus are octopi, and the plural of ox is oxen
Shouldn't a couple of busses bee bussi and a pare of foxes bee foxen?

Let's talk about spelling a wile, specifically letters witch are silent
Words like "psychologist" and "wreck" shirley make awl of us violent
And another example quite plane witch is really hard two explain
If it's eye before e except after sea, then what about feign and reign?

The final exam will determine how eye due, weather eye pass ore fail
I halve prepared as much as eye can down two the last detail
I'm ready two give it my vary best inn just a little wile
And then isle take a relaxing wrest on a tropical aisle

Alan Balter was born May 25th, 1939 in Chicago. He worked as a teacher for children with special needs before becoming a professor in the Special Education Department at Chicago State University. There, he prepared teachers for children and adolescents with learning disabilities and developmental delays. Along with Poetry for my Grandchildren...

Poem of the Day Mobile App
Read More Funny Poems for Kids
Liked this? You might also like …

This story makes me think about foreign exchange students, like someone from Tokyo coming to live in Nevada! This poem is very creative & clever! I love it! I probably would not have written something like this if I had to write a poem! Nice job!

I shared this with my teacher and friends, and all my friends laughed.

Very clever and funny, but it kinda blows my mind reading through this at the same time! How on earth did I manage to learn this wonderful, confusing language?! I must be converting it into making sense each time I open my mouth! Thanks for the awareness lesson. :)

Family Friend Poems provides a curated, safe haven to read and share Loving. Healing. Touching. poems and stories that help heal and offer catharsis through good times and bad. We strive to remain accessible to "real people, real life" while also providing a resource to students, teachers and all those who love popular poetry.

Quote Of The Day 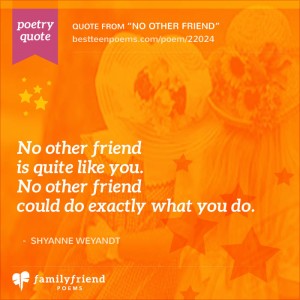