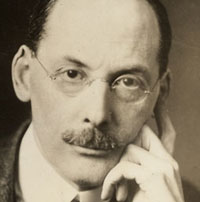 Edwin Arlington Robinson was born on December 22, 1869 in Head Tide, Maine, but he spent his childhood in Gardiner, Maine. His mother expected a daughter, so he was not given a name until he was six months old when his family was on a vacation at a resort. His name was pulled from a drawing. The woman who came up with the name Edwin was from Arlington, Massachusetts, so that's how he ended up as Edwin Arlington Robinson.

He was a shy and quiet child who came from an affluent family. Robinson loved the sound of words, and the person who first saw his talent as a writer was a neighbor and homeopathic physician, Dr. Alanson Tucker Schumann. Dr. Schumann tutored Robinson in formal poetic forms such as sonnets, ballads, and villanelles.

Robinson did not write many works other than poetry during his life. In fact, at one point in his life he wrote, "It must have been the year 1889 when I realized finally - that I was doomed, or elected, or sentenced for life, to the writing of poetry. There was nothing else that interested me."

In 1891, Edwin Arlington Robinson attended Harvard College. While studying there, he published "Ballad of a Ship" in The Harvard Advocate. His father died after his first year at Harvard, and Edwin only completed one more year before the loss of his family's fortune in the Panic of 1893 forced him to return home.

The first collection of poems published was The Torrent and the Night Before, named after the first and last poems of the collection, in 1896. It was self-published and going to be a surprise for his mother, but she passed away days before the shipment of copies arrived. Themes in this book were personal failure, artistic endeavors, materialism, and the inevitability of change. Because of the depressing nature, this book received some criticism.

Robinson's second volume of poems, Children of the Night, found itself into the hands of President Theodore Roosevelt, who had the publisher reprint the book, and he wrote a review of it. The Town Down the River (1910) was dedicated to President Roosevelt.

Edwin Arlington Robinson never married. The woman he courted at one point and intended to marry, Emma, married Edwin's brother, Herman. Once Herman died, Edwin proposed twice to Emma but was rejected both times.

"Richard Cory" is considered Robinson's most famous poem. Emma believed her husband, Herman, was the basis of this poem.

Edwin Arlington Robinson wrote 28 books of poetry during his lifetime, three of which received the Pulitzer Prize: Collected Poems (1922), The Man Who Died Twice (1925),Tristram (1928)