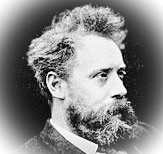 William Ernest Henley was an English poet and editor who was born in Gloucester, England on August 23, 1849. He was one of six children, and his father was a struggling bookseller. Henley studied at Crypt Grammar School from 1861-1867 under the direction of poet T.E. Brown, who was the headmaster.

At the age of twelve, Henley was diagnosed with tubercular arthritis. This illness caused him to miss a lot of school, but it was also speculated that the family's financial situation was a factor in his days off from school. In 1867, when Henley's father passed away, he left Crypt Grammar School to help his mother maintain the household.

Henley's beginning as a poet came from a 20 month hospital stay. In 1868 one of his feet needed to be amputated and the other needed surgery because of the disease that was eating away at his bones. It was during this time that he began writing poetry about life in a hospital. The collection, In Hospital, was later published.

Henley wrote a lot about inner strength and perseverance. His most popular poem would be considered "Invictus" (1875). This poem was recited by Nelson Mandela while he was in Robben Island Prison. It was also referenced in the 2009 movie Invictus. President Obama quoted it on December 10, 2013 after Nelson Mandela died.

Some of his collections of poetry include:A Book of Verses (1888)London Voluntaries (1893)Hawthorn and Lavender (1899)

During his lifetime, William Ernest Henley worked on editing four magazines: London, The Magazine of Art, The Scots (later National) Observer, and New Review. He first started as an editor for London when he was 27.

Henley was friends with Robert Louis Stevenson, who wrote Treasure Island. The character of Long John Silver is actually based in part on Henley.

William Ernest Henley passed away from tuberculosis on July 11, 1903 in Woking, England.

Out of the night that covers me,
Black as the pit From pole to pole,
I thank whatever gods may be
For my unconquerable soul. 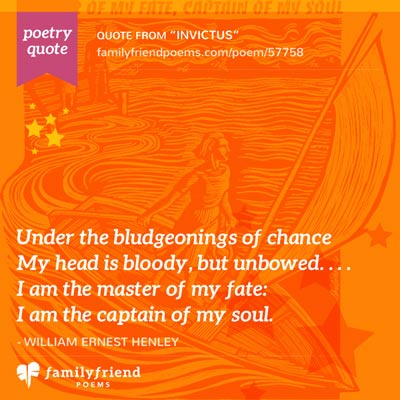 Under the bludgeonings of chance
My head is bloody, but unbowed. . . .
I am the master of my fate:
I am the captain of my soul.