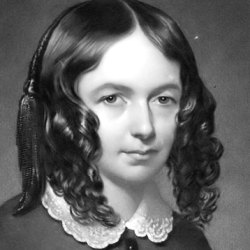 Elizabeth Barrett Browning was born in 1806 in Durham, England. The oldest of twelve children, Browning began reading and writing poetry before she was eight years old, and in 1820 her family published her first poem, "The Battle of Marathon". She was educated at home and studied classic works of literature at an early age. A very devout Christian and passionate reader, Browning taught herself Hebrew and Greek so she could understand the Bible and classic dramatic works in their original language. Her first collection of poems, An Essay on Mind and Other Poems, was published anonymously in 1826, but achieved no critical acclaim.

Browning's mother died two years after the collection was printed and her fathers plantations in Jamaica began to financially strain the Barretts because of the abolition of slavery. They moved from their country estate to the English coastal town of Devonshire in 1832, where Browning published her translation of Aeschylus' Prometheus Bound (1833). After three years on the coast, the Barrett's moved to London in 1835. Browning published her second collection of poetry, The Seraphim and Other Poems (1838), this time under her own name. It was well received and put her in contact with prominent literary figures at the time, such as Edgar Allan Poe and William Wordsworth.

Continually in poor health, Browning traveled to Torquay with her brother after The Seraphim was published, but returned to London in worse shape emotionally because of her brother's shocking and sudden death from drowning. She lived for five years after the incident confined to her room, reading, writing, and publishing poems. Her third collection, Poems (1844), drew the attention of Robert Browning and the two began communicating via letters. Their romance developed quickly through a total of almost 600 letters and in 1846 they eloped, much to the consternation and resistance of Elizabeth's father. They set out to travel Europe and settled in Florence, Italy, where their son, Robert Barrett Browning, was born in 1849.

Browning's poetry written in Florence was very politically driven, despite her romanticized solutions to serious and complex affairs of state, seen in Casa Guidi Windows (1851) and Poems Before Congress (1860). However, her collections of love poems dedicated to her husband, Sonnets from the Portuguese (1850), brought her the most lasting fame. Her "novel in verse" Aurora Leigh (1857) earned her acclaim as well but also collected criticism for the independent and alternative way in which her main character was portrayed. She wrote prolifically about injustices suffered by humanity, including children, slaves, and those in Italy fighting Austrian oppression. Browning died on June 29, 1861, in Florence, Italy.

Quote from “How Do I Love Thee” familyfriendpoems.com/poem/40719

How do I love thee?
Let me count the ways.

Earth's crammed with heaven,
And every common bush afire with God;
But only he who sees, takes off his shoes,
The rest sit round it and pluck blackberries.