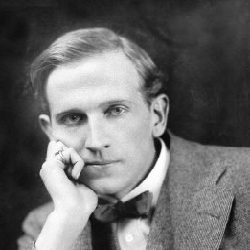 About A. A. Milne

The Milne family lived in a small public school house that the parents ran called Henley House School on 6/7 Mortimer Road. (Thwaite) John and Sarah Milne were both schoolteachers and had two sons when they had Alan Alexander Milne on January 18, 1882. Alan was considered smarter than his two older brothers, Ken and Barry. He spoke early and proved to be quite bright. When Alan was only eleven years old he received a scholarship to a prestigious school, Westminster school in London. There he latched on to one of his teachers, H.G. Wells, who was a positive influence and role model for him. (H.G. Wells later became a famous author, most notably for "War of the Worlds.") (Hunter)

When Alan graduated from Trinity College in Cambridge in 1903 he had dreams of being a writer. His father, in an effort to keep his sons from moving home, gave him money to live. It only lasted nine months, and to supplement his income he started publishing funny articles in multiple magazines. The most popular was a satire magazine that was around from 1841 to 1992 called Punch. Within a few years he was promoted to associated editor (Hunter).

At the age of 31, Milne married Daphne de Selincourt, a 23 year old pretty, affluent women. Shortly after their marriage World War I broke out and, despite opposing war, Milne enlisted in the army. He served in the Royal Warwickshire Regiment and was stationed in France. He was sent home for having very serious trench fever, which comes from lice (Hunter). However, he was then recruited by Military Intelligence to write articles in favor of the war (Finch). Sixteen years later he wrote about how war was intolerable in a piece called "War with Honour" (Thwaite).

In 1920 his wife gave birth to their only child, Christopher Robin. They called him Billy, and he was doted on by his parents. Milne was a very involved father, and often found inspiration with Billy, which he translated into his poems such as "Vespers," about Christopher Robin "saying his prayers" (Hunter).

Milne used to make up bedtime stories to help his son go to sleep. He used many of the stuffed animals in Billy's room as inspiration. One day, while visiting the London Zoological Gardens, Billy had a "meet and greet" with a very tame bear from Winnipeg, Manitoba, named Winnie. Billy bottle fed Winnie and played with him in his cage. Milne used this experience as inspiration. Ironically, Milne never read Winnie the Pooh to Billy (Hunter).

Christopher Robin, aka Billy, never appreciated his father bringing him into the limelight, as he was painfully shy. It is said that their relationship suffered because of it. It caused such a degree of resentment that Billy never read the books until later in his life (Hunter).

Milne continued to write, including political and religious essays. He wrote an expose opposing war and continued writing until he became ill in 1952. On January 31, 1956, Milne died after a painfully long illness due to a stroke.

In his lifetime, Milne produced many plays with varying styles and genres. Many of his children's plays were appreciated by adults. (Hunter).

Milne was unique as a writer, because while others wrote about the harsh realities of life, Milne created a whimsical reality full of friendship and laughter. Writing whimsical and funny stories was as a way to soothe himself from the combat he had experienced during World War. Milne's family and immediate surroundings were a strong and literal influence on the Hundred Acre Wood's stories (Hunter).

10 Interesting Facts About the Author of "Winnie the Pooh", A.A. Milne

Poems by A. A. Milne

View All Poems by A. A. Milne

Quotes by A. A. Milne

One of the advantages of being disorderly is that one is constantly making exciting discoveries.

Weeds
are flowers too,
once you get
to know them.