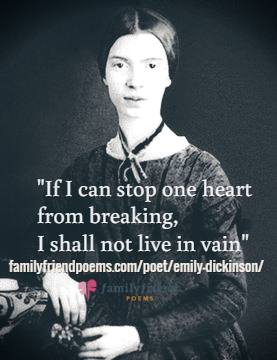 Emily Dickinson was born on December 10, 1830 in Amherst, Massachusetts. It was during her teens that Dickinson started writing. A lot of her writing was done in the solitude of her bedroom. Much of her life was spent on the family's homestead, as Dickson was not one to go out a lot. While she remained reclusive, she did keep correspondence by sending letters to various people she met.

Some of her reclusive behavior was due to being a caretaker of her mother from the mid-1850s to 1882. It was during this time that Dickinson accomplished a lot of writing. Her most intense writing period lasted 7 years, from 1858-1865. By the end of this writing period she composed 1,100 poems.

As with many writers, Dickinson's own experiences played a key role in providing inspiration for her pieces. Her poems examine themes such as love, joy, pain, grief, nature, and art. She was also influenced by poets of seventeenth-century England, reading the Book of Revelation, and her upbringing in Amherst, which was a puritan town.

Emily Dickinson is considered one of the most important and well known American poets. Many of her poems are studied in English classes across the country.

View All Poems by Emily Dickinson

A word is dead when it is said, some say. I say it just begins to live that day.

Quote from “Because I Could Not Stop For Death” familyfriendpoems.com/poem/40664

Because I could not stop for Death,
He kindly stopped for me;
The carriage held but just ourselves
And Immortality

Quote from “Hope Is The Thing With Feathers” familyfriendpoems.com/poem/40739 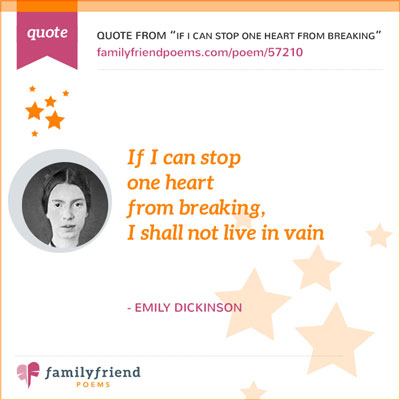 If I Can Stop One Heart From Breaking

If I can stop
one heart
from breaking,
I shall not live in vain

View All Quotes by Emily Dickinson