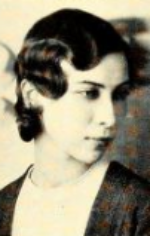 Clare Harner was born October 1, 1909 in Green, Kansas to Martha and R. C. Harner. Clare grew up in Howard, Kansas where Dr. Harner settled with wife and kids in 1912. She had two older brothers named Collis and Olin.

Clare developed an early interest in music and poetry. In High School a poem by Clare Harner won first prize at the "Elk County First Annual Track and Literary Meet". After graduating from Howard High School, Clare Harner attended the College of Emporia, where she headed the literary club before transferring to Kansas State University. At Kansas State, Clare Harner wrote articles for student publications. Clare graduated from Kansas State in 1931 with a degree in Industrial Journalism.

After graduation Clare Harner lived and worked in Topeka, Kansas as a secretary while writing poetry and submitting verses to small poetry magazines like Expression and The Gypsy.

In December 1934, Clare Harner's poem "Immortality" (now well known as "Do Not Stand At My Grave And Weep") was published in The Gypsy all poetry magazine. "Immortality" was reprinted in the Kansas City Times on February 8, 1935. The Gypsy published one other poem of hers, “Where You Go” in 1936.

Quote from “Do Not Stand At My Grave And Weep” familyfriendpoems.com/poem/24826

Do not stand at my grave and weep
I am not there; I do not sleep.
I am a thousand winds that blow,
I am the diamond glints on snow