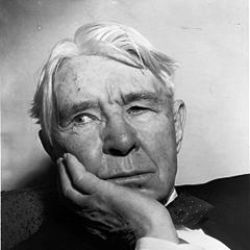 Carl Sandburg was born on January 6, 1878, in Galesburg, Illinois, to poor Swedish immigrants. Sandburg couldn't continue his education immediately once graduating from eighth grade due to the economic situation of his family. At 13, he worked jobs around his home city to supplement the income of his father from a railroad company in Illinois and his mother's wages as a hotel maid. Despite their money troubles, the Sandburg's instilled in their children the worth of diligence and education.

At the time Sandburg ought to have graduated from high school, he left his hometown and traveled by train to Kansas in search of a job, hiding in train cars to avoid the purchase of a train ticket. When he came back home, he volunteered to fight in the Spanish-American War and served for eight months. His service in the war qualified him for a tuition-free education at Lombard college in Galesburg, where he attended for four years, however, he never received a diploma. There, he met Philip Green Wright, an instructor who inspired the young poet to continue writing and actually funded the publication of his 1st collections of poetry, In Reckless Ecstasy (1904), Incidentals (1907), and The Plaint of a Rose (1909), which were originally printed as leaflets. Sandburg didn't publish poetry for several years, meanwhile, he worked as a journalist, taking a job as secretary to the mayor of Milwaukee, Wisconsin, and married Lillian Steichen.

Sandburg, his new wife and their three children moved to Chicago, Illinois, where he wrote editorials for the Daily News. His poetry was published in Poetry: A Magazine of Verse and several other literary magazines shortly after the move and convinced him to continue writing. Sandburg's poetry celebrates with unwavering conviction all aspects of American life, surely significant for him because of the immigration of his parents. Chicago Poems (1916), Cornhuskers (1918), and Smoke and Steel (1920) were filled with Sandburg's ideas about the American dream, the magnificence of the nation's agricultural and industrial features, and the unique distinction of Americans. Sandburg won the Pulitzer Prize in 1950 for his Collected Poems.

His lifelong interest in Abraham Lincoln, which resulted in two multi-volume biographies, earned him immense respect and the 1939 Pulitzer Prize in History. Sandburg also published popular short story and poetry collections for children, and the New American Songbag (1950), a book of American folklore for adults.

Sandburg continued to travel the world and wrote poetry until his death in 1967 at his home in North Carolina.

DEFINITIONS OF POETRY by Carl Sandburg

View All Poems by Carl Sandburg

Life is like an onion. You peel it off one layer at a time, and sometimes you weep.

Time is the coin of your life. It is the only coin you have, and only you can determine how it will be spent. Be careful lest you let other people spend it for you.

Poetry is the opening and closing of a door, leaving those who look through to guess about what is seen during a moment.

Nothing happens unless first a dream. 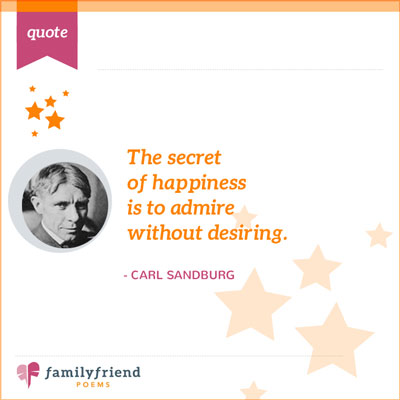 The secret of happiness is to admire without desiring.

View All Quotes by Carl Sandburg