I was first diagnosed with bipolar disorder in 1996. In the last 21 years I was told I had a new disorder every couple of years, despite the fact that my problems have been pretty consistent. Depression and anxiety were at the heart of everything, and they only got worse with age. Sometimes when we can't deal with things, we find someone who can, whether we realize it or not.

I've been asked about this poem a lot. While I was once told I had a Dissociative Disorder, this poem's describing how I personally identify with things. I feel like there's two parts of me...

Brian and I were polar opposites; he was loud and wild while I was more quiet and tame.
Despite our differences, both family and friends said we often looked and acted exactly the same.

I never understood it. My skin was unremarkable, nothing more than the average bruise.
Parts of Brian were mutilated. Years later he covered half his upper body with tattoos.

We were friends as long as we could remember. We were both trapped in a world we viewed as a prison.
We even grew to like the same type of girls. In our twenties we even dated two of the same women.

Brian and I met in Queens in the 1980s, both turned 21 in Ohio and toasted with our first beers.
I stayed in Ohio while Brian moved back to New Jersey for a number of years.

I had a normal life filled with normal experiences, Brian was much different.
I always made the attempt to be social, whereas Brian preferred to stay distant.

He introduced me to this little schizophrenic girl. He said she represents what he didn't think was real.
It was a few days after, he called me telling me he had become too numb to feel.

I lived a pretty normal life. I eventually found peace, although it took a while.
Brian only saw pain. He said the top of his cheeks hurt when he used to try to smile.

Even Brian didn't know when things changed, but he knew when his health went downhill.
The medication caused weight gain and disease. In the psychiatric world, hope is in the form of a pill.

Brian's mood swings became unbearable. He lost all but a few friends.
Brian can't see his own problems, but I assured him I'll be here til the end.

I often wonder what changed in him that made him change.
Was he made this way by a person, or is part of his brain just deranged?

I see scenarios where Brian would be happy. Why can't he?
There really is hope outside of those pills. Why can't he see?

Brian's tattoos started to reflect themes of distrust and betrayal.
Brian said he'd talk about his wanting to die more often, but he didn't want to seem ungrateful.

I knew human beings had good in them. Brian knew they did not.
I want to help people. Brian wants to watch your lying corpse rot.

I told Brian these doctors mean it when they swear to do no harm.
Brian said, "That ignorance is why I stabbed you in the arm."

I've been asked about this poem a lot. While I was once told I had a Dissociative Disorder, this poem's describing how I personally identify with things. I feel like there's two parts of me that are just too different to be the same. I don't see myself as two different people, I only have 1 name, and I look the same every time I look in a mirror. I was describing what my mind identifies with. The trauma affected part of me relates more with the scars, tattoos, and all negative emotion which seems to energize me in that state. Many of my tattoos are reflecting mental health concepts and symbols. I'm a good person. I often try to write in ways I'm speaking up for the people that nobody listens to, trying to help end suffering. The more I read about Eastern culture, Buddhist monks, and spirituality from authors like Eckhart Tolle, I wonder if what I'm actually describing is the difference between mind and consciousness. My mind has been corrupted, but my consciousness cannot be.

I don't really understand consciousness yet, so I may have been wrong. The important thing is what those things had in common with Eckhart Tolle. I bring this up because this poem is about mental illness and whether you have one or know someone who does, I believe his books can help. It showed me the difference between me and my mind. If you're like me, you completely identify with your mind and you may not realize that you are not your mind. It's just another part of the body we use for this world and it can become sick and damaged too. It's just another damaged part of your body like a broken leg, it is not you. Your mind has the illness, you aren't the illness. Once you truly understand that, you won't identify with the illness as much. That can create enough distance between you and the illness to help you see it for what it is. Which is just another sick part of your body and, like in physical therapy, you can isolate and strengthen that body part again. 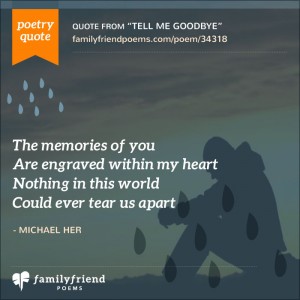