Theodor Seuss Geisel (March 2, 1904 – September 24, 1991) was an American writer and illustrator best known for authoring popular children's books under the pen name Dr. Seuss (/suːs/). His work includes several of the most popular children's books of all time, selling over 600 million copies and being translated into more than 20 languages by the time of his death.
Geisel adopted his "Dr. Seuss" pseudonym during his university studies at Dartmouth College and the University of Oxford. After leaving Oxford in 1927 he began his career as an illustrator and cartoonist for Vanity Fair, Life, and various other publications. He also worked as an illustrator for advertising campaigns, most notably for Flit and Standard Oil, and as a political cartoonist for the New York newspaper PM. He published his first children's book, And to Think That I Saw It on Mulberry Street, in 1937. During World War II he worked in an animation department of the United States Army, where he produced several short films, including Design for Death, which later won the 1947 Academy Award for Documentary Feature.
After the war Geisel focused on his children's books, writing classics such as If I Ran the Zoo, (1950), Horton Hears a Who! (1955), If I Ran the Circus (1956), The Cat in the Hat (1957), How the Grinch Stole Christmas! (1957), and Green Eggs and Ham (1960). He published over 60 books during his career, which have spawned numerous adaptations, including 11 television specials, four feature films, a Broadway musical and four television series. He won the Lewis Carroll Shelf Award in 1958 for Horton Hatches the Egg and again in 1961 for And to Think That I Saw It on Mulberry Street. Geisel's birthday, March 2, has been adopted as the annual date for National Read Across America Day, an initiative on reading created by the National Education Association.

Quote from “ Horton Hears A Who!”

A persons a person, no matter how small. 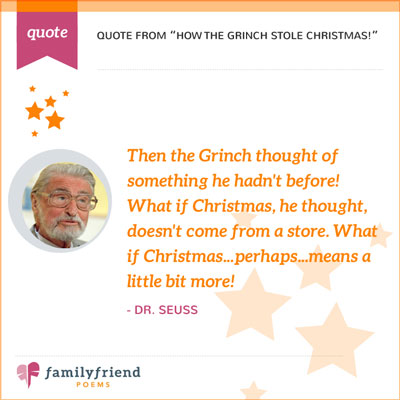 Sometimes, when I see my granddaughters
make small discoveries of their own,
I wish I were a child.

You're off to Great Places!
Today is your day!
Your mountain is waiting,
So... get on your way!

Quote from “I Can Read With My Eyes Shut!”

View All Quotes by Dr. Seuss