Poem About The Abused Becoming An Abuser

I have been abused like any other child out there has. It makes no difference, Abuse is Abuse! That's how I've learned to be respected by others. So do not judge me for what I've done in my past. Everyone makes mistakes and I have truly learned from mine..... Have You?

Hi, my name is Lisa. This poem really touched my heart in more ways than I'm even able to say. It brought back so many bad memories that I have tucked away for a long time. Sometimes I wonder...

During my childhood I was badly abused
and as I grew older, I became the accused.

The beating I took came straight from dad,
who used every obstacle to beat me so bad.

That tears that I've shed were because of fear,
that kick that I took it deafened my ear.

Doing hard labor at the age of nine
keeping the torment in back of my mind.

Eventually I became this child of steel
hard as a rock, with no tender feel.

I became immune to the blows to my head
as the tips of my welts that slightly bled.

The pain, it faded and my mind grew weak,
but as my body grew stronger, I became this freak.

He said he'll teach me from wrong to right,
but my rage grew stronger, so I stood to his fight.

He kicked down my door, I stood to my feet
he sensed the difference as our eyes finally meet.

I held no fear by the stare of my eyes
I was no longer afraid, but wanted him to die.

Speechless we stood as my fist starts to flinch
while he drew closer, I never flinched.

His first blow landed forcefully on my eye
I shook it off and said, "It's your turn to cry".

We fought like caged animals, He fell hard on the floor
I spat in his face and said, "NO MORE!".

After that night no two words were said,
walking to the beach with conflicting thoughts in my head.

Like: What did I do?, but yet felt as ease
I was happy to see him begging me please.
Was it the right thing for me to attack?
For the beatings to stop so he won't hit me back?
It must be the way for him to leave me alone.
I saw the fear in his eyes that had once been my own.

As I grew older it lingered in my mind
the memories I harbored never stayed behind.

I figured, "I'll be respected if I fight my way through because I've powered over my dad and I can power over you".

I never started trouble, but if it came my way
I'd fight to destroy with nothing to say.

The littlest thing you do can get me mad
who knows what will happen as you fade into dad.

My past still haunts me after all these years
it brings me power and hides my fears.

When I get into rage I can no longer see,
but I know you're my dad who stands in front of me.

I'll give all I've got till the damage is done
once again my past has won.

I've abused so many loved ones or not,
but I never cared and I never stopped.

It took that one night when she yelled it at me,
"The Devils in your eyes, Oh GOD please help me!".

The fear that I saw it made my heart burn
I wanted to run, but no where to turn.

I looked deep in her eyes and I seen myself there
she was badly bruised, just shaking with fear.

Now I'm in prison and paying my dues
for the damages I've caused with scared black & blues.

The memories continue to haunt me today
I want it to stop, please GOD take it away.

Hate is a powerful emotion. No one should minimize that. But hate is not insurmountable. There are many resources available; counseling comes to mind. We should not ignore our capacity to hate but try with our every being to overcome it. Love wins. Hate loses.

Hi, my name is Lisa. This poem really touched my heart in more ways than I'm even able to say. It brought back so many bad memories that I have tucked away for a long time. Sometimes I wonder is that where all this anger and hurt come from. It’s ruining my life and making people not want to be around me. Thank you for writing this poem. IT gave me assurance that I’m going to be okay. I put all of this behind me, and I wouldn’t be able to feel this relieved if it weren’t for you writing this poem. I just hope that you really realize just what you’ve done for me tonight. God bless you.

This literally explains what happened to me as a child. I'm so sorry that you had to feel that rage. 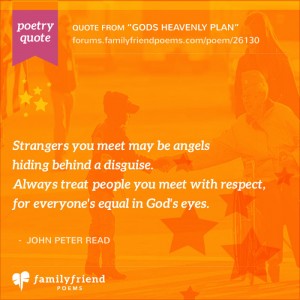