Poem With Advice To Son In Love With Wrong Girl

I wrote this poem for my son who is still in love with someone who is not good for him.

I can relate with other mothers who adore and love their sons. We want their happiness and self-reliance and that they can tell the difference between affection and real love and with the...

Look deeply in my eyes, my son
And listen to my voice
Please don't be a hostage
And know you have a choice
Can't you see you're better off
Without chains around your feet?
Don't you see how she delights
In your anguish and defeat?
Can you ever love someone
Who you can never trust?
These things, please ask yourself
This truly is a must
Do you like being deserted
Just when you least expect?
Has she taken all your pride away?
Have you lost your self-respect?
Do you like being cheated on
Mistreated and ignored
By someone who deceived you
That someone you adored?
Please listen to me carefully
Turn your back and run!
True love is nearer than you think
Believe me...my dear son.

I can relate with other mothers who adore and love their sons. We want their happiness and self-reliance and that they can tell the difference between affection and real love and with the 'right' person who deserves that love. Many women play games with men to get their way and what they want and do not accept a person for the way they are and want to change the person. This is wrong.

I already see flaws in an early relationship where the friend of my son wants to change my son to the point of seeking counseling. That is a red flag to trying to change him and not accepting who he is and what he has become as a person. If I felt he needed counseling, I would have been the first to know if he needed it. Patience has not been a virtue only time and understanding will remedy some of that. Other things I've seen are being more distant and showing more disrespect when more personal communication comes about.

Put God first and Merry Christmas and a better 2022.

I know how you feel, I too have a son who brought home his girlfriend. Since that day it's been a nightmare. He started lying, stealing, skipping school, became rude ,disrespectful, violent to the point of putting his hands on me. Is now raising a child that may or may not be his who knows? I have not seen him since August of 2014. I pray he comes to his senses soon.

While reading through these poems I came across this one and it describes my son's relationship to an eerie degree. Sadly, my son was blinded so deeply by his feelings that he took his own life, rather than trying to find a new way.

This poem touched my heart. Although my son's girlfriend is not cheating on him, she is NOT someone he should be involved with. She is a very self-centered, self-adoring, arrogant, lying individual who exaggerates all that she does. Since they have been dating he has lied to me more than he has his entire life. She treats our family with such disrespect. No one can understand what he sees in her. It has put such a strain on our family. He will not listen to anyone and so I know he has to figure this out on his own. I only pray that our family does not become divided before then.

I was touched by this poem, my mother passed away from lung cancer and I was the youngest of 4 children. I was born with birth defects that any parent had to deal with but yet they kept strong and tried to make it better. the sacrificed everything, my father worked 3 jobs to pay for my medicals bills while my mother stayed home to take care of my every need. I sometimes think that what more could I have done to save her life like she did mine. I know now she lives in me and for the first time reading this poem I was able to sit back and remember how truely I was blessed as a child and now a man

I feel the same way and know just how you feel, Bonnie. Been there, done that. Is a horrible, worrisome, helpless experience. The writer must have quite a hard time of it with her son to write about it. I assume she did all she could and writing about it was her last resort. I pray we do not have to go through this again. I hope our sons keep their distance from these heartless girls.

This poem hit home. My son dated a girl for years. He was good for her and good to her. She cheated and lied for almost the entire time they dated. She was not a good person and certainly NOT good for him. He broke the relationship off. I don't think he wanted to, but I know deep down he knew she was all about. I'm so proud he was smart enough to know he didn't want to continue suffering and being made a fool of. I suffered with him. I worried about his every move. I hated that girl and I am not a hateful person. I thank the Lord everyday that she is no longer in his life. It is very painful for a mother to watch and not know what to say or do to ease the pain of their child's broken heart.

I just don't know what I would do or how I would react or feel if in a few years they would get back together. 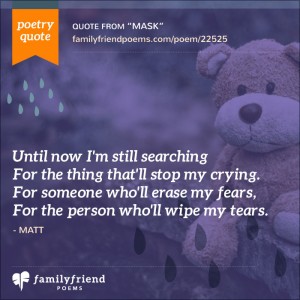