Poem About Son's Death Touching The Lives Of Others

Our son David Jones died November 12, 2009. When it was the one year anniversary of his death, we wanted to do something for him, so in our local paper we put a picture of him, and I wrote this with the help of a friend. Thank you for allowing us to share.

...Our boys had become two very amazing people in the short time they had here on this planet. And I guess, they have been called upon for higher purposes. I am grateful for my part in my...

David, We Miss You!

Published by Family Friend Poems August 2015 with permission of the author.

In your life you touched so many.
In your death, many lives were changed.
You were an amazing young man.
Without you here, our lives will never be the same.
We miss you more than words could ever say.
Even more with each and every passing day.
We just hold on to the memories that we made and
All the promises God so graciously gave.
Resting assured when Jesus comes there will be no more sadness,
No more goodbyes, just life together eternally with Jesus by our side. 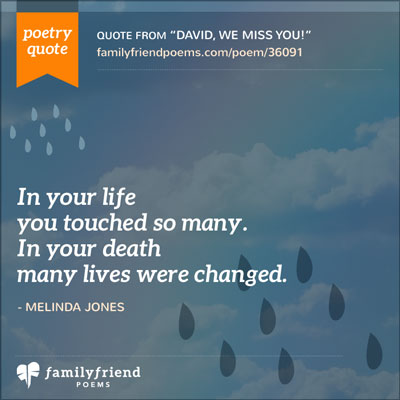 Poem of the Day Mobile App
Read More Son Death Poems
Liked this? You might also like …

...Our boys had become two very amazing people in the short time they had here on this planet. And I guess, they have been called upon for higher purposes. I am grateful for my part in my son's journey. As I am sure you are as well. Thank you, Melinda, with all my heart, for sharing David through your poem, and for giving me the opportunity to share a bit of Ryan's story with you. Also, I had written a sort of tribute to my Son, after 1 year, of his moving on. You have inspired me to submit it to this site. Hopefully, it will be accepted and get published. It is titled "A poem about My son, Ryan, 25 years on Earth." Maybe you could keep an eye out for it? :)
Please take good care and always remember......
With love,
Sharon

Dear Melinda, Thank you for sharing David's memory. I lost my son, Ryan, at 25 years old on December 20, 2013.
He graduated 1 1/2 yrs. prior from Virginia Tech, and continued to reside in Blacksburg, VA. When we decided to hold his Gathering in Blacksburg, I originally thought that it was the right thing to do for Ryan's people, for the friends that became his extended family during the time he spent going to school. And it was. However, it was Ryan's people, his friends that have now become my family, that carried me through the worst thing I have ever had to do. Through thier endless stories and tearful eyes, I could feel Ryan's presence within every being that gathered on that day in his honor. I learned that he had touched so many lives in such a profound way. I believe that even though we, as mothers, have been left to endure life with this undescribable void, we have been given the most wonderful gift of two very special souls.

Family Friend Poems provides a curated, safe haven to read and share touching poems and stories that help heal and offer catharsis through good times and bad. FFP strives to remain accessible to "real people, real life" while also providing a resource to students, teachers and all those who love popular contemporary poetry.

Are you a poet?