Mourning The Loss Of A Father

My dad was diagnosed with prostate cancer in February of 2007, and for 3 years he tried to fight this killer, but the cancer won. I miss him every day, and I write to help me through my pain. This is just a poem I wrote describing how I feel. He has been gone a year and a half now, and even though I was by his side when he died, I still cannot even for a minute believe he is really gone. Love and miss you, Dad. You are my Angel.

It has been 8 months since I lost my father. He left us on August 7, 2020. I lost my everything. I was alone with him. My brother-in-law was going out from the hospital room, and I was...

Can't Accept That You're Gone

I hate that I can't see your face,
except for a picture on my mirror.

But I love that when I look at it,
I feel you are near.

I hate that you can't speak to me
when I mention the word "DAD."

But I love the way your voice is in my memory
from all the talks we had.

I hate that God took you so soon,
when I still needed you here.

But I love the thought of you at peace,
no more pain and no more fear.

I hate not knowing for sure
what happens when you die.

But I really love to believe
there is a heaven past the sky.

The thing I love to hate the most
is when people think I'm so strong.

But it actually only seems that way because
I can't accept the fact that you really are gone! 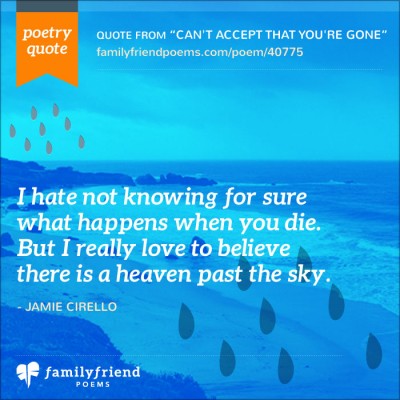 more by Jamie A. Cirello

It has been 8 months since I lost my father. He left us on August 7, 2020. I lost my everything. I was alone with him. My brother-in-law was going out from the hospital room, and I was talking to papa. All of a sudden he had a heart attack. The doctor declared death. My father was king to his family. Now we are only three sisters and a mom. Nobody except Allah is with us.

My father became seriously ill in January 2018. I went to the hospital and he had the flu and pneumonia. I sat with him day and night. He didn't want anyone to touch him. I asked him what was wrong. He said, "I am tired; I am ready to go. I know you and your brother will take care of all my business." My eyes begin well up, and he turned his head. I told him how much I appreciated him for teaching me about God. He put a beautiful smile on his face. A month later he made his transition. I keep thinking about the fact that he told me he was ready to go. I have not really grieved over this death. The night I got the call of his passing felt like something left my physical body.

It's about time I tell someone about my story maybe it will help me I don't know but here goes, 3 months after my mum found out she was pregnant with me, my dad found out he had cancer and he was told that he was to spend as much time with his family as he could because he wouldn't be around to see me be born or grow up, but the doctors were wrong. When I was 3 he stopped doing the chemo as it was making him feel worse and more weak, the doctors said that the cancer had gone but they was wrong it had come back worse and more stronger, by time I was ten the cancer had spread from his lungs to his liver and through his blood and into his bones, my dad was 62 and the way he was hunched over he looked way into his 70's near 80's, I moved in with him when I was 11 and I tried my best to help him as much as I could, but it was no use, he was too out of it on drugs that he barely realized what was happening around him, but the one thing he always asked me was what I had drawn recently as he would like to take a look. I was 14 we went down to my mums, we were outside having a fag when he suddenly hugged me, kissed me and said that he loved me and was proud of me and I was always to remember that. I didn't take any notice of what he said, so I went back inside. He come back inside and just collapsed on the floor in front of all, my brother got to him first and when he turned over he died. For the past three years all I have been doing is trying to get through but I can't, my whole world was just ripped out from under my feet and there's a massive hole in my chest that wont ever close. 29-01-1946 till 11-12-11

I'm so sorry. Thank you for sharing your story, I know it must have been hard to write those words. It sounds to me like your dad said his goodbyes to you and felt at peace. I know nothing I can say will make your pain go away, but just know he is always with you forever in your heart and remember he is no longer suffering.