I lost my youngest brother suddenly. I couldn't sleep one night, so I wrote this poem to read at his service. He was born on my 5th birthday and we always joked around that we couldn't ever get rid of each other. I would say, "I can't lose you, can't break you, can't sell you at a yard sale, and I can't throw you away, so we're stuck with each other." He would say the same. If I only knew I would lose him so suddenly to death. 10/14/1970 to 08/09/2018

My youngest brother died in Jan 17. He had been ill for over 8 months with cancer, and because I did not get on with his wife, she had sworn all their friends to secrecy not to let me know...

You left without
Warning.
Gone so fast.
Now all we have
Are memories
Of our past.

You are loved by so many.
You might not
Have known,
But in our hearts
Is where
You have grown.

The memories
I have throughout
The years
Will last
forever with
Laughter and tears.

We shared our
Birthday
Since I was five.
My wish now will be
To have you back healthy
And alive.

I will miss you
Oh so much.
So will all
The lives that
You have
Touched.

I can't say goodbye.
I can't accept
Your death.
You will live in my heart
Forever
Until my last breath. 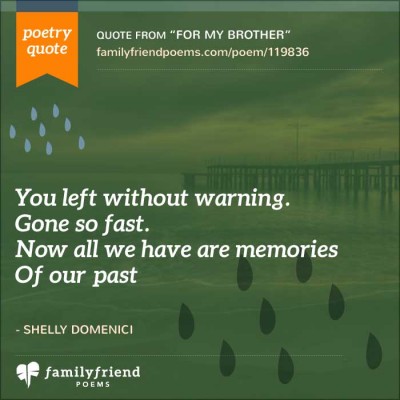 My youngest brother died in Jan 17. He had been ill for over 8 months with cancer, and because I did not get on with his wife, she had sworn all their friends to secrecy not to let me know how ill he was. Then I was not told that he had died. On the day of his funeral, a member of the family felt so bad for keeping such a secret from me, so she phoned me and told that my brother had been buried that same day. He was more like a son to me as our mother passed away before his first birthday so I had brought him up as a baby. There were 10 years between us. he was in his 63rd year when he passed away. Some people often wondered why I did not get on with his wife...say no more.

My brother was born on September 27, 1999. His name was Makhosini, and he left this world on the 31st of July 2018. It still feels unreal. I miss him every day, every hour. I wish someone would just wake me up from this bad dream.

My baby brother was also born in 1998 and passed away in October 2017. He was also 19 years old when he passed. His name was Trinnen. Those beautiful souls journeyed here for a short period of time to teach us so much. Their legacy shall live on.

It is a pain that is unexplainable. You see, I had lost my father in June, my uncle in July, then my baby brother in August. Then in December I lost my mom, which has just shattered my heart. I'm so sorry for your loss. My heart, pain, and prayers are with you and your family. God bless you, and thank you for sharing your story.

I lost my little brother who was born on the day before my 16th birthday. He was very cute and handsome. I loved him deeply.

I just lost my younger brother on 5-4-19. I was reading poems looking for something to share at my brother's services, as I do not see myself with your same gift. I read your poem and wanted to share it too. Your poem truly inspired me! Thank you so very much!

So sorry for your loss. You can share my poem whenever you'd like. Thank you so much for sharing it. I'm glad that it inspired you. Brought a smile to my face.

This poem hits home. My loss was my older brothers. Years have passed, but still that pain remains. Memories of them creep in every day, but still it hurts to be reminded of the loss my family went through.