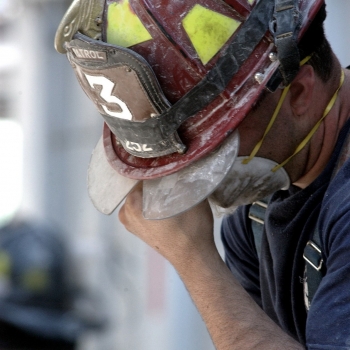 On September 11, 2001, the unthinkable happened as terrorists attacked the United States. Nearly 3,000 people died as a result. Terrorists flew two planes into the World Trade Center in New York City and one into the Pentagon in Washington, D.C. A fourth plane did not reach its intended destination. The courageous passengers aboard United Airlines Flight 93 fought to regain control of the aircraft, and it crashed in Western Pennsylvania.

May we remember all the people who lost their lives that fateful Tuesday morning and those who've had to live with the lingering effects. May we also remember how we came together as a country to support one another. We thank all the brave men and women who were first responders that day and the military personnel who fought to keep us safe. We will not forget!

This is the very first poem I ever posted in the forum section of familyfriendpoems. Although it falls in the category of "ones I wish I never had a reason to write," it is one of my all time favorite poems that I am proud to say I have written. Please pray for our brave soldiers that believe in fighting for our country's freedom.

When A Part Of America Died

September Eleventh Two Thousand and One
The Big Apple awoke, a new day had begun.
The Statue of Liberty was standing so proud
As God and Freedom were singing out loud.

Native New Yorkers were starting to enter
The Twin Towers called The World Trade Center.
They went to their office and they worked with pride
On this day when a part of America died.

The people of Boston were also at work
Responsibilities they never would shirk.
The traffic was brutal as it is every morn,
But each day they brave it for the show must go on.

Now Downtown was open, Logan Airport was too
As people boarded their flights they had not a clue
Terrorists were sitting right there by their side
On this day when a part of America died.

Now at 8:46, the whole world was in shock
When there was an explosion that shook the whole block,
And downtown Manhattan was like a war zone,
For these terrorists attacked us right in our own home

As the planes hit The Towers, there was a bad fire.
The people were screaming as the flames grew higher,
But through this disaster they still showed their pride
On this day when a part of America died.

The police and firemen didn't think of themselves.
Not one person said, "It's every man for himself."
For to those trapped inside each man was a brother.
On their wounded shoulders they carried each other

Although September Eleventh brought death and dismay.
We all banded together in the U.S.A.
We showed our courage, our strength and our pride
On this day when a part of America died.

Whoa! This is an amazing poem. You're right, you never should've had a reason to write this, but I'm glad you did! It really warmed my heart. You are right about 9/11 banding America...

This was written close to the anniversary of 9/11 as a poem to remember the tragedy that happened decades ago and to pay tribute to the everyday heroes that rose up during a very dark time.

The horror we endured that day,
The shock, the pain, the fear.
A nightmare unimaginable
To those of us still here.

Dust and ashes, souls swept away,
A city brought down to her knees.
The losses so horrendous,
Visions too monstrous to believe.

The devastating images
In all our hearts remain.
The destruction of humanity
Left us all forever changed.

The faces of those cruelly lost
Are burned inside our minds
And the mournful tears still resonate
Of those loved ones left behind.

The heroes and the victims,
The acts of courage through that hell.
The tales of stunning miracles
That each survivor lived to tell.

Human beings blindly reaching out
To save the strangers in their wake.
Risking all without a thought
Just for someone else's sake.

A ravaged, urban war zone
Now just remnants of mankind.
An incomprehensible catastrophe
That stopped all sense of time.

How could we ever rise again?
Was there a way to make things right?
Did any fight still live inside of us?
Was there any hope in sight?

We fought for our humanity!
We carried on for those we lost!
We kept on moving forward
For those who paid so dear a cost!

Decades have passed and here we stand,
Our flag waves boldly in the breeze.
It's our faith in God and country
That now brings us to our knees!

Names etched in bronze with pride and sorrow
So the world remembers them.
It's the power of their memory
That helped to make us strong again!

I was not born during 9/11, but my parents would tell me memories of that day. The family we lost. The friends who were killed. The heroes that gave their lives. I am now 13 years old. I dedicate this to Lawrence Patrick Dickinson, a man who died in the Twin Towers. His son was born 3 months later on HIS birthday and was named after him. He is a man who will always be remembered.

I was waiting for the TV repair man to come and was watching a news flash when the first plane hit! When he arrived, we carried on watching together and saw the second plane hit the second tower!! We stood stunned for a while then realized we both had tears in our eyes. I had to put pen to paper!

The month was September and the day was quite nice,
But this was to change on the shake of a dice.
Two planes with hundreds of people on board
Were about to crash, so they tried to get word
To families and friends on the ground in their homes,
Waiting for loved ones to use mobile phones.
All we could do was watch things unfold.
Unable to help made our blood run cold.
As the planes hit the towers, folks got trapped inside,
And having no warning, there was nowhere to hide.
There was no other way out, so that is why
People broke windows and jumped out to die!
All we could hear was the deafening sound
As both twin towers fell to the ground!
The dust and the litter that shrouded New York
Was totally horrendous and left nowhere to walk!
Osama Bin Laden is the one we should blame.
He and his followers show no pity or shame.
We hope and we pray that they made it to Heaven,
All those poor souls he murdered on nine eleven!

This is a tragic ballad written in memory of 9/11.

That morning we woke up,
Like any other day.
We brushed our teeth, I brushed my hair.
Nothing new to say.

He said "Goodbye, I'm going to work,"
While I stayed at home.
I took the kids to school
And heard a ring on my phone.

I picked up my cell,
Holding my coffee cup.
It was my sister Stacey.
She said, "Turn the radio up."

When I got home
They were waiting at the door.
They called me over.
My eyes started to pour.

This morning I wake up
With no one in the bed.
I wish my husband were here,
But he can't come back from the dead.

When I look at the American flag, this is what I see.

When I Look At The American Flag

Pride In Living In America

When I just even glance at the American Flag, I feel a surge of pride.
The stripes and stars gleam in the morning as we put it up to rise outside.

When we think of the flag, I realize that horrendous date, nine eleven.
I think of those noble people who went to work and sadly passed on to heaven.

I think of the two towers, proudly up high.
They were sadly gone in one night.

I can't imagine the people running down those long winding stairs.
Those people must have been dodging those fiery glares.

The man on the plane trying to stop the terrorists' way is a hero to me.
I think that is the way everybody should try to be.

When I look at the American Flag, I think of all the many blessings I have.
I have a family, a house, a school, and a best friend named Trav.

The American Flag is a great symbol to me.
I hope that everybody can see what I see.

The events of 9/11/2001 are embedded in the memory of most, if not all, Americans. This is especially true for the combat veterans who had fought for liberty on the soil of foreign lands. When the fight was brought to our own shores, we were devastated. This is a tribute to the men and women who lost their lives as innocents or public servants. May God bless them all!

When foreign people search the world
to find a place to live,
so many choose America.
We have so much to give.

Then terrorism viewed the world
and sadly they would choose
our own beloved America.
We have so much to lose.

When terror struck, our world stood still.
We watched our comrades fall.
With heavy hearts and steadfast thoughts,
our servants took the call.

We watched in helpless horror
while terrorism slept.
With swollen eyes and broken dreams,
we went to bed and wept.

Our eagle flies above us now.
His talons are unfurled.
His wrath has been both swift and just
and felt throughout the world.

The "Giant" is awake once more
and once again we see,
in light of all that we've been through,
our freedom is not free!